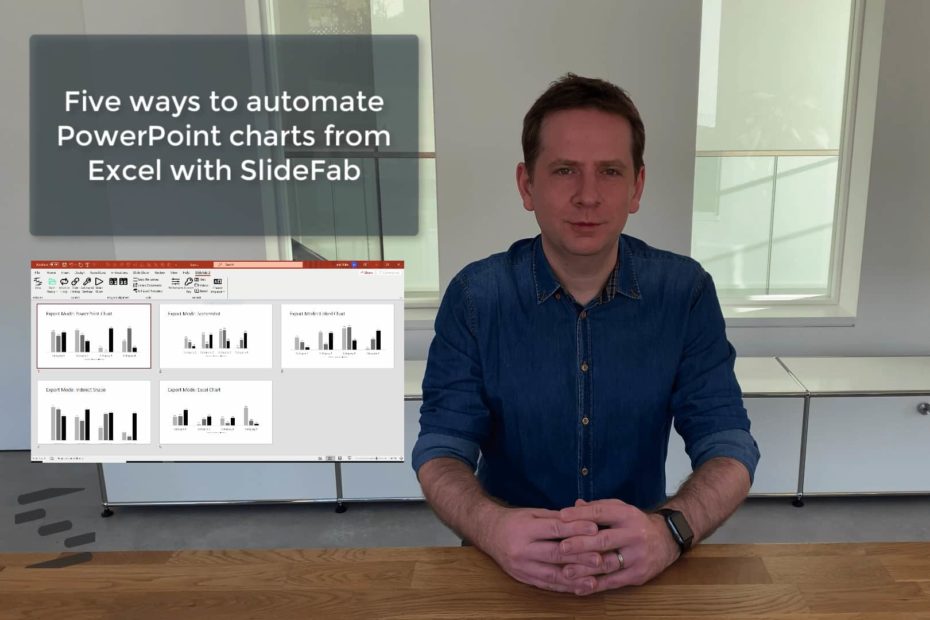 When creating recurring PowerPoint slides based on Excel workbooks, there are 5 different SlideFab Export Modes to choose from. This video elaborates on how to choose and employ the right Export Mode. The video shows how to set up the Excel model and the PowerPoint slide template for the use of SlideFab.

This video illustrates building the Excel workbook and the PowerPoint template to automate PowerPoint charts from Excel with SlideFab 2. In fact, this video explains the principles and the necessary steps in detail.

The 5 different Export Modes to link/export an chart from Excel to PowerPoint are:

Explanation of differences between these chart-related Export Modes

In the end all these export modes work, actually. However, there is a difference between them: While “Screenshot” and “Indirect Shape” lead to a picture in PowerPoint, the rest will have an editable PowerPoint chart object.

Surprisingly, the chart objects are not all the same: The “Linked Chart” export mode leads to chart which can not be edited in the end. PowerPoint disables the editing buttons.

Fortunately, both “PowerPoint Chart” and “Excel Chart” lead to charts with editable embedded data sheets. The difference is that the “PowerPoint Chart” is not so powerful. The reason is that it is impossible to get the meaning of the data range provided. So, for example, data labels do not work this way.

But this works with “Excel Chart”. This way, SlideFab recreates the whole chart object from scratch in PowerPoint. SlideFab also puts the whole data worksheet to PowerPoint which alleviates later changes of the chart.

Please note: This video will not elaborate on the mass-production functionality of SlideFab using Iteration Loops or Slide Loops. Additionally, it will also not go in to detail regarding think-cell.

Here you will also find the Excel workbook and Powerpoint presentation file as download. These can be tried out with SlideFab 2 right away. They contain the formulas and the SlideFab 2 settings as created throughout the video.