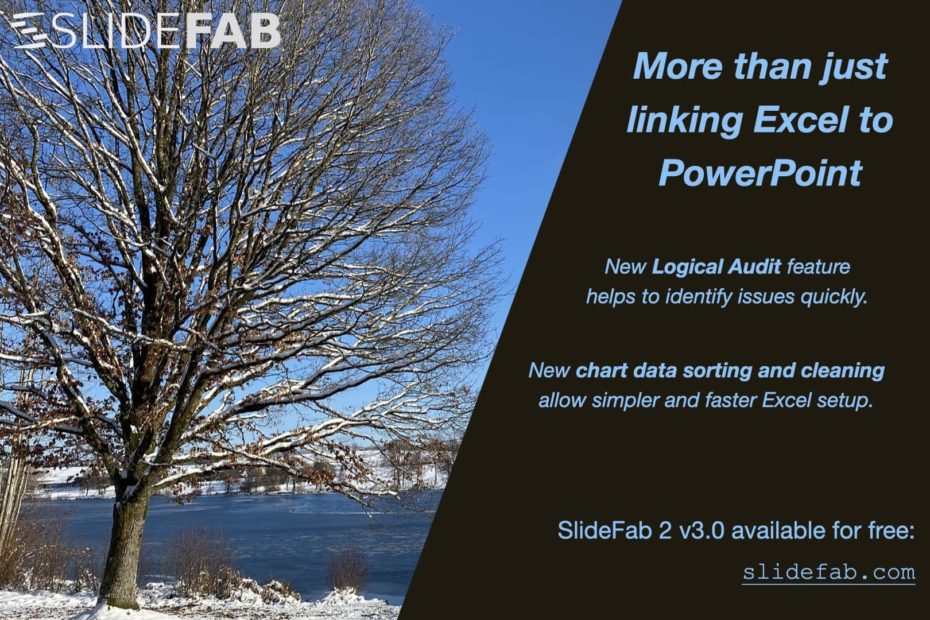 This update to version 3.0 brings various new features to SlideFab:

And last but not least, this new version incorporates a couple of bug fixes.

Logical Audit: This feature will help to identify issues in the SlideFab setup:

So far SlideFab gave feedback regarding potential issues when selecting the PowerPoint shapes. This was and still is a helpful feature. However, for larger presentations the situation is not that clear. Issues would appear once the output slides are created. Then the situation is like more like searching for the needle in the haystack. Possible but not really comfortable.

Based on this learning, SlideFab 2 v3.0 contains a Logical Audit feature. This will run the iteration loop without creating slides. Instead it checks all linked shapes for potential issues or flaws. Afterwards, the results are shown in a tree structure. After clicking on the leaves for slides or shapes, SlideFab highlights the source in Excel and the target in PowerPoint. This creates a new level of transparency as flaws (often related to failing lookups), which appear only for some of the candidates, will be identified rigorously.

SlideFab 2 version 2.0 introduced the Excel Chart export mode which will rebuild an Excel chart in PowerPoint from scratch. Version 3.0 will introduce the option to sort values and categories by their value and also to remove empty entries. This is super helpful as the Excel solution to achieve the same was rather complicated (an explanation with an example follows soon). SlideFab recognises chart types where this feature makes sense (e.g. not for scatter plots as sorting doesn’t make sense here). SlideFab offers these features also for charts with a secondary axis separately.

However, one thing is important to keep in mind: Excel Charts allow very strange setup picking data from nearly everywhere, such that sorting doesn’t really make sense (in some cases neither for SlideFab nor for a human). So in these cases it might not work, obviously.